It’s June 5th, 2011 – and I got an email request for a steel drum recording session from VH1 reality star Jeramy “Rainbow” Gritter, formerly with the band White Starr and the tv show, The Rock Life.  I’ll admit, at the time I really had no idea who he was but I generally relish the opportunity to play outside the box, and this seemed like just that. I had encountered postive experiences in the past by stretching musical boundaries recording with West Indian Girl, and thought – why not?

So I arrived at his place in West LA and this Zappa-looking dude with wild hair, foo-manchu and a machine gun tattooed on his chest greets me and intorduces himself as “Beardo”.  He was looking for some steel drum sounds for a special track he was working on, found my website, contacted me and I accepted the session. It was my first association with Beardo, and we actually hit it off famously. I thought the track he had for me to play on was cool, kind of David Byrnes-like, basically drums and a bass line with a solid groove. We miked up the pans and it was like… press record – a single pass, I jammed and he loved the vibe, and it was in the can. Just goes to show, you never know what will happen if you leave yourself open to the possibilities.

I later learned that this inspired creation was a divergence from what he normally produces and he was jazzed about it, and asked me if I would consider doing an upcoming show with thim. Within weeks I found myself rehearsing with his new band, prepping to make a guest appearance with him at the world famous Roxy on the Sunset Strip.

Now everyone knows Hollywood can be a very small place, but hanging with Beardo was always a trip – even the rehearsals were an introduction to heavy celebrity bangers on the scene. On my way to Nate’s to rehearse I rolled my gear right past guitar legend Steve Vai, who just happened to be hanging outside with his band on break.

I stopped to say hello to the bassist that I recognized, Bryan Beller whom I had met through guitarist Rick Musallam with Mike Keneally’s band Beer for Dolphins; and then after rehearsal sitting in Beardo’s car, smoking and listening to some of his newest tracks, I look up to see Gwen Stefani’s then husband, Gavin Rossdale from the band Bush packing up gear next to us. It was surrealistically cool at the time. And so it went the day of the gig, I remember meeting the headliners Simon Rex aka Dirt Nasty, Andre Legacy, and rapper Riff Raff as they rolled in for the Roxy show sound check, and while they were running through some of their stuff – we broke for coffee, went across the street to the Hustler boutique, which just happens to have a great coffee cafe inside the lobby; and as we are discussing something crazy like the correct pronunciation of the Moog synthesizer, who should roll in but the grand Hustler himself, Larry Flint – with a body guard, pushing him in his cusom gold plated wheel chair and his red hair. As he rolled past us Beardo turns me and says:

” yo just hang with me Arpad and you are going to meet everyone – that’s how I roll”.

And I’m the first to admit, that wasn’t far from hype. Beardo later introduced me to lots of people that day, including rapper Micky Avalon and his former White Starr bandmate Cisco Adler. 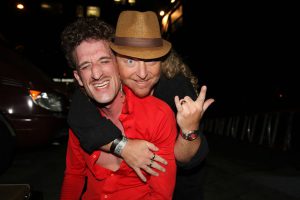 I played another show with Beardo, with yet another new persona as “Attack Decay” at the world famous Malibu Inn for Cisco Adler’s 2012 Cinco De Mayo show; and then later hung out and partied backstage with popstar Ke$ha, who came to see the show. Of course Beardo played guitar on several of her international tours and they were quite friendly but that’s another story… always a trip but lots of fun, Beardo-the-trailer-trash-hero!

My track appears on the song “When I Think of U” – Attack Decay, and last I heard Beardo was on tour in South America perfoming with Julian Casablancas as JC and the Voidz. Yo! Beardo! When I Think of U – Attack Decay